* If you click a link from this page and make a purchase, we may receive a small commission at no extra cost to you. Learn more. 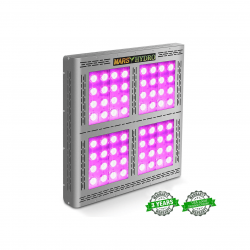 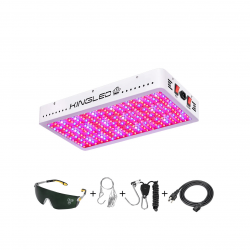 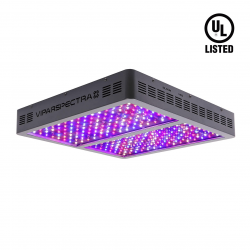 In today’s article, we’ll go over some of the best full spectrum LED grow lights available. But first let’s discuss what LED lights are, and why they could be beneficial to YOU the indoor cultivator.

If there’s one thing that plants need to thrive, it’s light. So it’s of crucial importance that you pick the right lighting system when starting a grow set-up.

There are many different tried and tested methods out there. All produce some impressive results, but with the advancement in LED technology in recent years.

More people are starting to realize the benefits of incorporating the best full spectrum LED grow lights in their grow rooms.

They’re still a long way off from overtaking the traditionally used MH, CFL, HPS lighting systems in terms of popularity and pricing for the home grower, but significant inroads have been made.

It now seems it’s only a matter of time before LED becomes the standard for growers worldwide.

LED or (Light-emitting Diodes) is a form of lighting that comes in various colors depending on their intended use.

Initially because of the high cost compared to the end product, LED lighting was not a commonly used system for indoor growing.

But with the cost reducing significantly over recent years and the technology advancing due to extensive research, LED has now become much more accessible to your average indoor cultivator.

LED lighting comes in a multitude of colors that have varying effects depending on which color or combination of colors are used.

Viparspectra is one of the more popular reviewed brands in the LED market that are commonly used for indoor grow set-ups, but being popular doesn’t always mean you’re the best.

The Viparspectra range is generally a trusted well-known brand and offers growers a varied enough selection of different products compared to their competitors. They’re of mid-range build quality and offer you some good specifications.

Prices are fairly reasonable, often starting from the eighty dollar range but can reach up to just under the five hundred dollar mark, so be sure you’ve done your research before buying.

If any problems do appear, Viparspectra is generally quite good and will try and rectify as quickly as possible once it’s been confirmed you’re a verified buyer.

This is a Chinese brand, which can sometimes be off-putting to some. Because of this, shipping may generally take longer.

As for complaints about the products themselves, generally the most common come from lights underperforming, lights becoming too hot and burning the crop, and the product developing faults fairly quickly or not working at all. (This could be due to 3rd party sellers and the type of grow set-up) fans can sometimes be noisy, as well as plants taking longer to flower compared to traditionally used lighting.

Viparspectra is a well known and established brand who have consistently rated four stars and above, they produce affordable good quality products and offer various models to satisfy most growers needs.

Some of the most popular LED models Viparspectra do are:

Trusted, well-known brand that offers cultivators a varied selection of different products compared to their competitors

Full spectrum lighting which provides plants with all they need, in all stages of growth, from veg to flower

This is a Chinese brand, which can sometimes be off-putting to some. Because of this, shipping may generally take longer

Some reports of fans being overly noisy

Overheating in some models

Bestva is another well-reviewed Chinese manufacturer of LED grow lights, consistently receiving four plus star reviews. They fit nicely into the mid-range LED category, alongside it’s fellow Chinese LED company Viparspectra, they offer a varied selection of products, but not as many as some of their competitors.

Bestva offers cultivators another option in the increasingly crowded LED grow light market, they’re not producing top of the range equipment or anything revolutionary in terms of design or specifications but can be thought of a close competitor to Viparspectra.

In terms of design and functionality, they’re very very similar, with hundreds of four star plus reviews most indoor growers are satisfied with the end product.

As standard, they offer duel chip technology with high par output per watt, two fans that are generally quiet on the ear with ventilation holes integrated into the glass.

Again, cons of the Bestva brand come in the form of products failing completely in short time frames, overheating, missing or defective parts as well as coloration of the bulbs favoring one color.

Bestva will generally try and rectify any faults with the product as quickly as they can, but again being based in China has it’s limitations, paying for returns and long waits being the most common that buyers of Bestva products have to face.

Bestva offers another choice in the mid-range LED market, prices are very reasonable for most models starting just under the ninety dollar range, although they’re not the best as Viparspectra are slightly cheaper. As both brands are very interchangeable and are consistently rated four and above stars, you can do much worse than go for either.

Some of the most popular models:

Strategically placed holes in the aluminum for heat convection

Most models come with a 3 years warranty

Reports of short lifespans with some models

Platinum Grow Lights, are a well known established company that has been in the LED market for a few years now. They offer a wider selection of lights than most of their competitors and are consistently rated four and above stars on their products.

Based in the USA and sold through most well-known retailers, Platinum grow lights have been producing reasonably good products for a very long time and know their business very well. They’re not the best quality you can find or the best brand, but they offer another option in the mid-range LED market.

Based in the USA, and offering 5-year warranties on most products and models, Platinum LED lights offer some of the highest PAR/LUMEN per watt compared to their competitors, with a good quality 12-band full spectrum from UV to IR.

Incorporated into most models is a user-friendly switch enabling the grower to go from veg to flower with relative ease, two high speed whisper quiet fans and an aluminum heat sink as standard. To further penetrate the crops canopy, Platinum has included 90-degree secondary focusing lenses.

Platinum Grow Lights are generally more expensive than most others in their range bracket, which isn’t ideal and some common complaints of the brand are of panels not fully working, blown bulbs and a shortened lifespan of the panels in general. Flowering is often described as less dense, but this could be put down to the individual growers’ technique, and set-up.

Platinum Grow Lights have some good overall features with the added bonus of being based in the USA, but as with most brands in this range, offer nothing that is really individual or innovative to tell them apart from the rest. They offer a good beginner standard, with higher prices.

Some of the highest-rated and most popular models are:

Based in the US

Higher priced than other competitors

Another Chinese based company, King LED have been going since 2012, and have made considerable inroads into the LED market just like Viparspectra and Bestva. They have a pretty extensive range of full-spectrum LED lights, and most are top-rated, averaging four-star plus reviews across most models. To be honest, these three brands are pretty interchangeable and offer the indoor grower a good selection. They’re known for producing some basic no-frills LED full spectrum panels, at affordable prices that can be found on most big online retailers, to see their higher spec LED you’d have to pop over and take a quick look at their website.

Low cost and thousands of four-star plus reviews are the first things that will stand out to most, standard build quality and features are to be expected from King LED. Most models come with double chips, efficient PAR/LUMEN output, and are full-spectrum, mimicking good conditions for veg and flower growth.

King LED just like other Chinese firms, mainly suffers due to build quality, red and blue light disparity, shortened product life span and blown bulbs. King LED try to answer any customer queries as fast as possible, but with being based in China again has its limitations.

King LED is a company that offers various LED products at reasonable prices, they’re sold through most popular online retailers and sit comfortably within that mid-range quality bracket. Of course, If you’re one of the unlucky ones that experience problems, you’ll probably never buy from any Chinese branded LED companies ever again, but with a high volume of users experiencing no problems whatsoever, King LED is seen by many as another viable option.

Some of the most searched for and popular models from King LED lights are:

Established in 2009, Mars Hydro is another Chinese branded company, that has gone from strength to strength, eventually becoming the trusted well-known brand they are today. They sell everything from grow accessories up to grow tents, all at affordable prices while producing high-end quality products. They have warehouses across the globe and ship to most countries. Averaging four-star plus reviews from thousands of reviewers across the whole of their product ranges, you know you’re in safe hands when opting for anything from Marshydro.

Compared to the other brands, Mars Hydro is on another level. They offer the grower a very extensive range of LED lights, all the while never slipping in terms of build quality, four-plus star reviews are very common for most of Mars Hydro products, with the majority awarded five-star ratings consistently.

Prices vary but generally start off around the sixty dollar range, which isn’t bad compared to build quality. With warehouses based around the globe, shipping is relatively quick, and any problems you may encounter are generally solved fairly quickly, they also offer a three-year warranty on most products.

If you’re one of the unlucky ones that experience problems with a Mars Hydro product, you’re usually covered by a three-year warranty, but that’s only if you can get them to honor it, a small minority of consumers have reported problems getting Marshydro to follow through on their warranty claim, this can obviously be very frustrating, and as a consequence trust can be lost with the brand itself.

As well as the above, problems have been reported of certain products prematurely failing, bulbs burning out long before their time, and low yields produced due to insufficient power. Saying that this is a very small minority, and no doubt some problems encountered can be put down to the grower, their set-up or products being damaged in the delivery process.

Ships to most countries

Different models to suit your budget

3-years warranty with a customer support base in the US

Premature failure of some models

After looking at the pros and cons of some of the best full spectrum LED grow lights that we’ve featured in today’s review, our top pick is the Mars Hydro LED grow light range.

When on a budget, or if you’re a beginner to intermediate grower, then you can’t go to far wrong when opting for Mars Hydro.

Want to be notified when we release a new in-depth guide or product review? Sign up to our newsletter and receive updates when we publish new content.

As an Amazon Associate we earn from qualifying purchases.